This book is also affectionately dedicated to my late father

An Experienced bushman and gold miner. Although the big gold strike always eluded him, he unearthed the Tarana Skull No1 {SOLO MAN} a 300,000 year old Indoctrinal fossil Cast, which demonstrates that the first modern humans evolved in Australia. 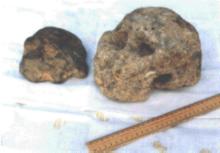 This Book Is Also Dedicated to

* The open minded, free thinking visionary, who does not know the meaning of the word "impossible"*

*The field-working, rugged adventurer who never stops at the foothills, and always wants to see what lies beyond the next mountain*

*The dedicated individualist who has the courage and fortitude to defend his ideas, regardless of overwhelming opposition*

*All those who against all reason, dare to dig deeper than anyone before them in their search for the truth*

Pyramids in the Pacific

Rex Gilroy widely regarded as the foremost authority on the "unknown" history of Australia, for his dedicated, lifelong fascination and research into our "hidden history", with this book, dares to question the blind dogmas of scientific conformitism, with evidence for which, Australian university text books have no answers.

An historical researcher, archaeologist and naturalist, Rex frequently tours the country to give slide lectures on his findings.

His files bulge with thousands of reports concerning mystery rock inscriptions, ancient megalithic stone structures and other relics, as well as ancient historical written accounts of contacts with Australia and its near island neighbours, by many ancient maritime civilisations, which throw doubt upon the time honoured, indoctrinated belief that this land had remained unknown to Old World nations, until the arrival of the first Dutch explorers of the 17th century.

This daring and outspoken researcher, also claims that Australia was inhabited by far earlier stone-age races than the Aborigines, and has gathered a mass of evidence to support his claims.

With "Pyramids in the Pacific" Rex hopes to inspire future researchers to follow his example and dare to question long-established dogmas of our ancient past; and like him, reveal evidence of long-hidden mysteries about which, the historical and scientific establishment would prefer we knew nothing.

When not in the field, Rex and his wife heather {a nursing sister by profession} live in Katoomba, New South Wales, together with a huge library of books, and his natural science collection of thousands of insects, fossils, rocks and minerals, zoological anthropological and archaeological specimens and which is the largest privately owned collection of its kind in Australia.

Besides their many and varied researches, Rex and Heather are also involved in community service work, through there local Lions Club. They have two daughters.