Australia's Leading Authority on The Yowie

Giants From the Dreamtime

The Yowie In Myth and Reality

Introduction: I believe, these mysterious, seemingly fearsome yet totally fascinating hairy primates will continue to survive, hidden in the remote and still largely inaccessible recesses of our vast mountain ranges. It never ceases to amaze me just how much interest my lifelong research has created. Perhaps the main reason why millions of people worldwide find the yowie/yeti/Bigfoot mystery so fascinating is that in modern times it is one of the last great unsolved mysteries-in the tradition of the Loch Ness Monster, the 'giant monitor lizards' of Australia and the 'neodinosaurs' of the Congo.

People are naturally excited about these and other unexplained mysteries and want to read all the available literature about them. But there can be nothing more exciting than actually participating in the search for such creatures. I therefore feel privileged to be the founder of yowie research in Australia, and to have encouraged others to follow my example. The search for surviving 'relict hominids' in remote hidden regions of the world has been called the "last great search" and for me it is a fascinating one.

All the Following Yowie Evidence is Gathered for Scientific Research at the:

All Images and Reports Copywritten 1965-2002 and beyond: The Author Rex Gilroy 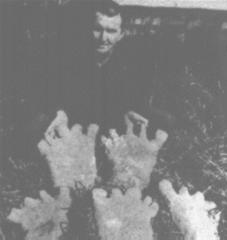 Cambelltown, NSW -- Tracks of what may be a Yowie have been found in bush terrain near Cambelltown, says Rex Gilroy, Director of the Australian Yowie Research Center, Katoomba.

He is planning a safari into the area where the large footprints were found by a creek. He said, "The footprints were too large to have been made by any human being." He recently took further plaster casts of footprints in the Jamieson Valley which were 45cms by 35cms.

Accurate drawing is a reconstruction from eyewitnesses' tales.

Note the shape of the feet.

Katoomba, NSW--The recent anxiety among truck drivers on the Newell Highway about giant hairy Yowies is not new and can be traced back to Yowie activity in the 1870's, says Rex Gilroy, Director of Mount York Natural History Museum near Katoomba, and Australia's leading Authority on Yowies.

He said "Truckies wont stop and sleep at nights on the Newell Highway. In fact is was barricaded recently because certain weird and unexplained things have been happening up there. One truckie was parked on a desolate part of the highway north of Coonabarabran recently with a load of cattle on his truck. They started bellowing and woke him up. When he got up and went around to the back of the truck he saw something that looked liked a big Gorilla disappearing into the scrub." Sightings on the Newell Highway go back to the 1870's with newspaper reports of a creature seen by a government wagonette driver.

Coonabarabran, NSW--The Director of Mt York Natural History Museum Rex Gilroy, would like to hear from any residents of the Coonabarabran district who have seen the Gigantic Hairy Yowie, or found large footprints or other evidence. Rex Gilroy has made previous expeditions to the Pilliga Forest, the Warrumbungles and Mt Kaputar National Park in search of the "Yowie". He said, "Stories of Yowies having been seen in the Coonabarabran district date back to the middle of the 1800's."

Two years ago a group of tourists found giant apelike footprints in road side bush, similar to experiences in recent months of truck drivers in that area. More recently Rex Gilroy received a report from a Sydney motorist who has stopped his car for a rest and sighted a hairy apelike creature about 10 feet tall watching him from nearby bush.

Mr Gilroy says similar reports have come from Lismore and Kyogle areas on the NSW north coast. A farmer riding a horse saw a man sized hairy creature in jungle a few miles from town. Another farmer was approached by an apelike creature bigger than a man while exploring mountains near Lismore. On the Gold Coast a hiker saw a 12 ft creature in a rainforest watching him from trees outside Nerang.