Visitors To Our Australian Shores

No subject provokes more argument among Australian historians than the mystery surrounding the first discoverers of our continent. The man officially recognised as our first discoverer is the Dutchman William Jansz, who in 1606 chartered the west coast of Cape York, from Pennefather River 200 miles south of Cape Keerweer (Cape Turn Again). Then came Dirk Hartog (1616) who left a plate nailed to a post on Dirk Hartog island, recording a visit to the Western Australian coast.

In 1770 Captain James Cook explored our east coast and claimed Australia for Britain. This event would seem to most historians to complete the picture but it does not. It is not generally known, nor is it very often discussed among British historians, that when Captain Cook sailed for Australia he had in his possession a secret chart of our east coast, provided by British Naval Intelligence of the period. Cook knew exactly where he was going. The chart is believed to have been the work of Christovao de Mendonca, a Portuguese mariner, who in 1522 is claimed to have circumnavigated and mapped our entire continent with the aid of earlier Chinese charts.

These facts alone make it quite clear that the Dutch were definitely not our first discoverers. Even the name "Australia" is of Spanish origin. Belief in a Southern Continent prompted kings of Spain to equip large expeditions to search for "Terre Australis". Actually, it was the Incas who informed the early Spanish conquistadores of a great land across the Pacific ocean called "Uru", meaning "Great Western Land of Gold". After Columbus "discovered" America (the Vikings beat him by 500 years), Alvano de Mendana sailed from Callao, Peru, on this quest. he sailed too far north and found the Solomon Islands.

In 1605 de Quirros, with Torres as navigator, sailed from Callao and took possesion for Spain of the New Hebrides, and of "all lands as far as the pole". On 14th May, 1606 he named the places he had discovered and resolved later to find "(Austrialia of the holy spirit). He inserted the extra "I" in honour of King Phillip the 3rd of Spain, who was of the house of Austria, and the expeditions patron. This led to misunderstandings and the idea that "Australia" was not derived from "Terra Australis". This matter has long since been resolved. Because I feel it germane to this story I interpolate here a discovery in Sydney Harbour which suggests that Cooks landing was anticipated by another, nearly two centuries before. 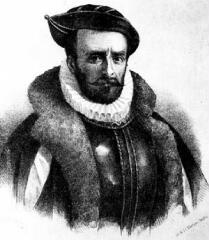 As stated earlier, Alvano de Mendana left Callao, Peru, intent on finding the mysterious south land, but he ended up in the Solomon Islands. Officialdom moved slowly in those days and it was to be 28 years before he again left Callao to form a settlement there. On Mendana's second voyage, in 1595, his fleet of four tiny ships ran into trouble a month after leaving the Marquessas Islands. Near the island of Tinakula, where an active volcano was erupting, the ash fallout was so dense that the fleet became virtually fogbound.

In the confusion one ship, the Santa Isabeel, captained by Lopez de Vega, disappeared and was never seen again. The site of the presumed disaster was near the Ellice Islands, on the route between the Marquesas and the Solomons, Mendana detached a second vessel, the Santa Barbara, to search for the missing ship, and continued onto the Solomons. But was it really a disaster? The supposition is that, if she was not sunk, the Santa Isabel sailed Solo 2000 miles south-east to make contact with the Australian coast and what is now Sydney harbour. Having careened there she may have gone south to Wollongong and beyond, then turned north to be wrecked in Torres Strait.

In 1912 unexplained rock carvings were discovered upon a rock face in Sydney Harbour. The carvings consisted of two outlines of a carrack, a vessel steered by a sweep-like a Greek Trireme and very much like the Santa Maria, in which Columbus sailed to America in 1492, 76 years before the presumed date of the carvings. Beside the ship-carvings were found the capitals "B.A.L.N". in a line, and beneath them "Z.A.I.H". Further below was "W" beside the sacred symbol of a cross within an oval, the symbol of discovery or intended conquest by Spain. The symbols were Spanish latin doodles, a form of Latin "shorthand" used between the 15th century and 17th centuries.

They were interpreted as meaning "We in the Santa Barbara and Santa Isabel conquered 'W' from point to point by the sign of the Cross". "N.I.H " could have been the signatures of witnesses to the declaration. These entries in Australia's cliffside visitor's book could have been left by the Santa Barbara, sent to search for Lopez de Vega and his Santa Isabel. A similar doodle inscription found near Wollongong in 1970 could have been left by crewmen of the Santa Isabel on her voyage from Sydney Harbour. Following the discovery of the Wollongong carvings a further series was found near Gosford in 1971 which states:"We in the Santa Isabel were here". Some miles away an Aboriginal rock carving depicts a human figure in the outline of garments reminiscent of a Spanish soldier. 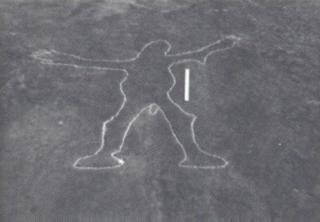 Visitors to Australia who sailed here from Peru to investigate

Inca's tales of the great land to the West.

Knee and elbow joints may be typical Armour worn by Soldiers.

Perhaps these interesting discoveries could be linked to the Bronze cannon found near Cape York a few years ago bearing the inscription "Santa Barbara 1596". These disclosures imply that our history books are in need of re-writing to include many other, earlier settlers who were visiting our shores centuries before the Dutch.

Indeed it has long been my considered opinion that our history books should be revised to include navigators who were coming here not hundreds of years, but thousands of years before the European explorers. In fact, the earlier sketchy outline of a great continent south of the equator was on an enormous globe (10 feet in diameter and probably the first of its kind) which Crates of Mallus, in Asia Minor constructed in 150. BC. Crates reasoned that the Earth was a sphere and needed balancing continents to keep its equilibrium. He therefore envisioned four continents divided by two great oceans. Africa, Europe and Asia he described as a single continent, "Oecumene". Crates then drew in "Perioeci" which we now call North America.

In the vicinity of Panama and south of it, but seperated by his east-west ocean, he placed "Antipodes" which now is South America. His fourth land mass, balancing out the other continents and situated below what we now call the Indian ocean, he described "Antoeci", now known as Australia. How much this great forward thinker depended on reason, deduction or vague reports from seafarers doubtless we shall never learn-except from an archaeological discovery of written material. Nevertheless, he anticipated Columbus's discovery of America by more than 16 centuries and the discovery by European seamen, of Australia seventeen and a half centuries later. There is considerable evidence to indicate maritime knowledge was far more extensive in ancient times than it was at the time of the later European explorers.

Flavius Philostratus of Athens (A.D 175-249) wrote: "If the land be considered in relation to the entire mass of water, we can show that the earth is the lesser of the two". If the ancient Greeks, Cretans or Phoenicians had not crossed the Atlantic or the Pacific oceans, how did Philostratus know that the oceans cover the greater part of the surface of the planet?

History is silent on the fate of many ancient voyages. On the Adelaide coast in 1931 a farmer discovered a set of mysterious letterings which, when translated recently by European Egyptologists was found to read " Men of the Pharaoh of the city of Sais, Ot of Kish". This inscription could help to solve a 2000 year old mystery concerning the fate of one of the great voyages of antiquity. The "Pharoah of the city of Sais" could only have been Psammetichus who, following the expulsion of the Assyrian invaders from Egypt, moved his government to Sais, a Nile Delta town, and established the 26th Dynasty, the Saitic period of Egyptian history, from 663 to 525 B.C, which saw a period of renewed territorial reconquest and extensive exploration for trade.

Kish was an ancient Babylonian town of the Euphrates and was the birthplace of Ot, perhaps one of the greatest Babylonian mariners of his day and an Admiral in the service of the Egyptian Navy. Psammetichus, upon hearing the mariner's tales of a strange land in the Indian ocean, equipped an expedition of several huge galleys and placed Ot in command with a crew of skilled Egyptian and Phoenician seamen. After leaving the Red Sea coast, this expedition disappeared never to be seen again. How far did it penetrate? The evidence indicates that Ot and his men reached Australia.

There is certainly plenty of evidence to prove the ancient Middle and near-eastern civilizations had knowledge of the mainland and South-east Asian region over 3,000 years before the birth of Christ. Persian, Babylonian and Phoenician carvings have been found in Java. Trading voyages sailed regularly from the Red Sea deep into South-East Asia by navigating on the seasonal drift-currents. Just how many of these expeditions sailed has always been a mystery. However, there is reason to believe that at least some of the voyages penetrated Torres Strait even to Polynesia, leaving influences in culture which are evident to this day.

About 900 B.C King Solomon and Hiram, King of Tyre, had sent a fleet manned by Phoenicians into the Red Sea to search for the legendary land of Ophir and its riches.Where it penetrated is un-established. There is however reason to believe that "Ophir" was the West coast of Australia and the source of much of the Gold used in the building of King Solomons Temple.

While investigating Aboriginal cultures in the North-West Kimberly's during 1931, Professor A.P Elkin of Sydney University came upon tribes displaying Mediterranean racial features, with Egyptian words in their language. Professor Elkin also recorded quite ancient Masonic rites and beliefs, and an Earth Mother cult identical in every respect with that of the Ancient Egyptians. These findings led Professor Elkin to believe there were historical connections with the Mediterranean dating to before the time of Christ. Torres Strait islanders once mummified their dead in a way which Cambridge University Anthropologists noticed was identical to the method practiced during the 21st Dynasty 2,900 years ago. The inference is that Egyptians seamen, settled in Torres Strait, taught the people there how, in their own ritual fashion, to preserve the bodies of the dead. The custom continued until Christian missionaries forbade it late last century (1800's) If Egyptians, or folk from their part of the world, did reach Australia they supposedly took home materials as lasting evidence of their visit.

Such evidence exists. In 1964 the tomb of a woman, dating back to 1,000 B.C was found in the Jordan Valley. Examination of the body revealed that Eucalyptus resin was employed in the embalming process.As in those times Eucalyptus could only have been obtained from either Australia, Torres Strait or New Guinea, does it not seem reasonable to assume that the Ancient Egyptians must have been here? Of course, some authorities are going to cry absurd to such claims, preferring to confine themselves to the traditional view of Australian discoveries and exploration. The trouble with most European historians is that they place far to much emphasis upon European achievements, without giving any consideration to the navigational abilities of other earlier seafaring races. Just because the voyages of Jansz, Hartog, Dampier, Tasman and Cook are well documented does not mean that other earlier, less well-recorded or unknown voyages to Australia did not take place.